Angelos Angelou and Emi Sini both received their degree in engineering from National University of Athens in 2003. Since 2005 they have started their successful career by writing a great number of theatrical plays, songs and books for children. In 2007 they won the Greek State Theatrical Play for Children Award, in 2016 How to Make an Elephant Dance won the Greek State Picture Book Award while their picture book An Alphabet Journey was included into the White Ravens list of the International Children’s Library of Munich. Some of their books have been translated into other languages while others have been turned into theatrical plays.
They have also established one of Greece’s most successful artistic theatrical group “Kopernikos”(www.kopernikos.gr), where every year, since 2009, they write original and notable theatrical plays for children of every age, accompanied by original songs and music. 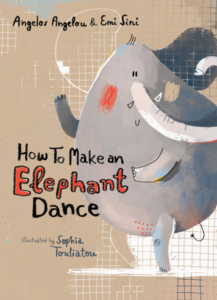